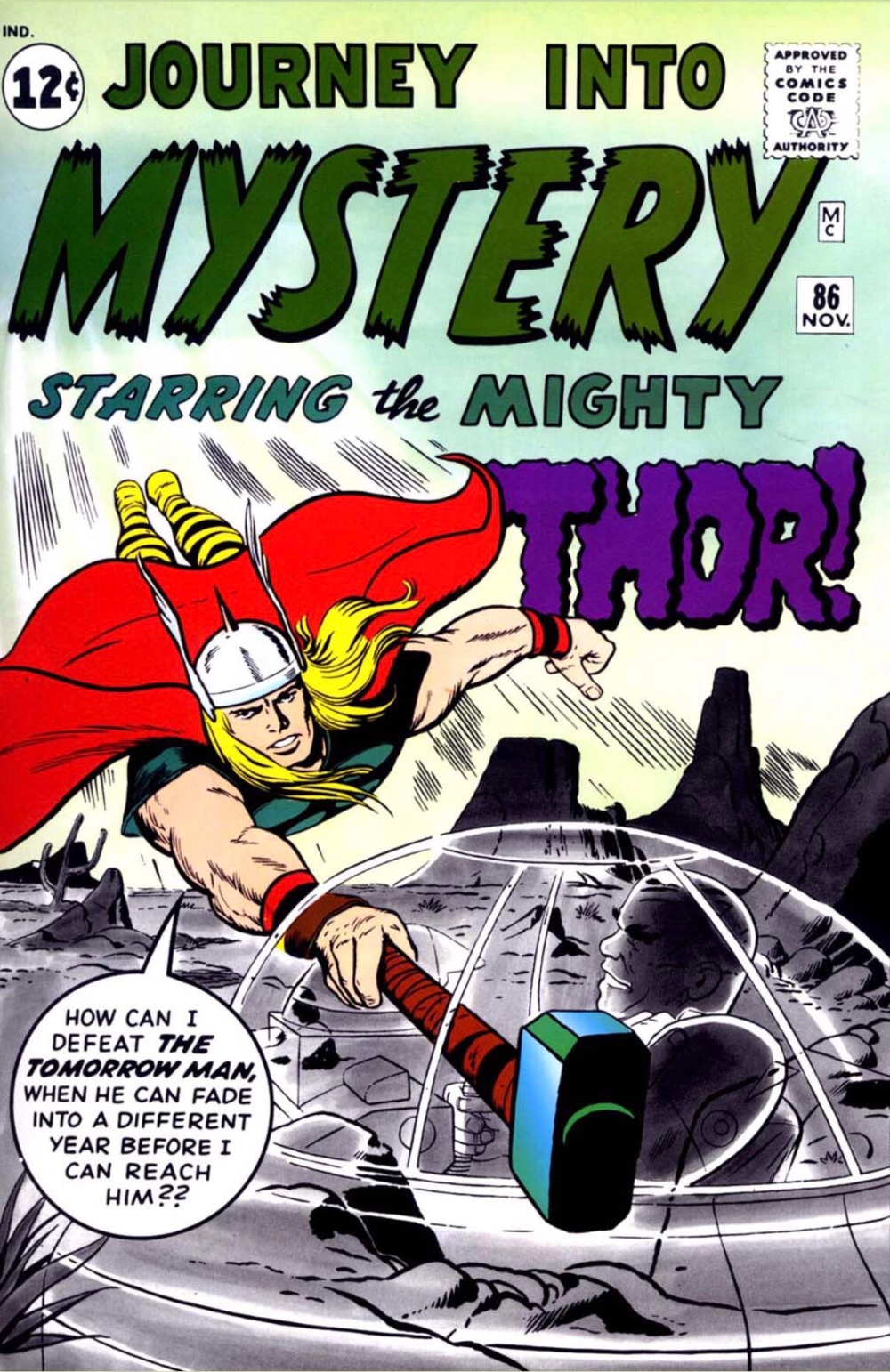 Out of the different series I’m currently shuffling between, I can’t stress how exciting each Thor adventure is to read! I need to start reading these after every Hulk issue, just to bring me back to life.

Great cover, and wonderful job building intrigue around a villain known as “The Tomorrow Man”. Not only is the cover exciting, but it’s so refreshing not to see tons of text everywhere. This is clear action, and I really love the way Kirby depicts Thor as though he’s about to fly out of the cover and right towards the reader.

That momentum keeps going when you open the first page! I love these flash pages that start the story with a jolt, almost like a second cover. How many times have I seen a really cool cover, only to open it and find the first page is just people standing around talking. Way to lose a sale. Stan Lee and Jack Kirby definitely knew what they were doing. One of the things I may eventually write about (I want to, at least) is how Kirby draws machines. He had a unique way of interlocking weird shapes and geometric patterns that became a signature of his. If you really study the machines above, the designs don’t really make sense, but that isn’t the point. They are fantastic creatures, and while Kirby was known for his superheroes, he always tied Sci-Fi/Fantasy elements into his art.

The story opens with Thor assisting the U.S. Military while they test weapons of war. Like I’ve mentioned, there’s a lot of effort on Marvel’s part to be super patriotic during this era. Today, this kind of stunt would result in the superhero facing a philosophical crisis. Not only that, but they might also likely face backlash amongst the readers for being pro-war. There have been comics that have covered this type of situation, and feature “what if” stories. DC Comics released Mark Millar’s “Red Son” back in 2003, which reimagines a world where Superman were Soviet instead of American. Marvel’s Civil War also heavily covered territory regarding superheroes and their cooperation with the demands of operating under government guidelines.

This is a Marvel blog…but if you haven’t read this, I highly recommend it.

Anyway, the reason I’m really going on about this, is because Thor just unquestionably helps the military do their tests. At one point, they realize he’s too good for their tests, so they need to kick it up a notch.

They pretty much tie him down, and put a cobalt bolt next to him. They just want to see what the bomb does. It’s just a test…but he’s just super chill about the whole thing. No biggie. HE BELIEVES he can survive it, one of the military generals says. 🤷‍♂️

We flash to the future about two hundred years, and find out that weapons no longer exist. There’s a power hungry guy named Zarrko, and he wants to rule the world. His plan is to use a time machine (that he happens to have laying around) to go back to Cold War-era America and steal a nuke. The nuke would be a weapon he could then use to threaten everyone to submit to him.

Right as the bomb is about to go off (and possibly kill Thor, or maybe not, we don’t know) the “Tomorrow Man” shows up on the spot, steals the bomb, and goes back to the future!

Scouring around after he flees, the military personnel find a flake of metal from his machine. They deduce that he must probably come from the future…because it’s pretty obvious. In fact, here’s the panel where they reach this conclusion. 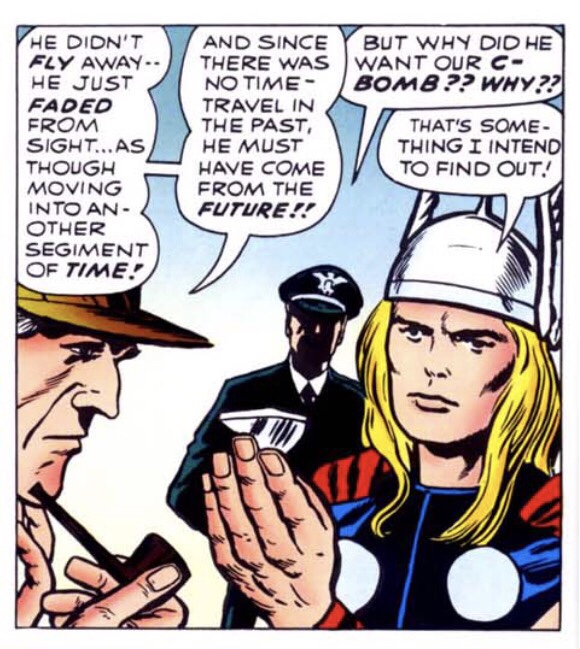 It reminds me of my favorite riddle Batman and Robin solve in the 1966 Batman movie:

Commissioner Gordon: (reads) What weighs six ounces, sits in a tree and is very dangerous?

Robin: A sparrow with a machine gun!

The difference here is that Batman was always in on the joke. Despite the cheesiness, I kept reading the issue. I really wanted to know how the hell Thor would track him down!

He calls a storm in this super awesome series of panels. Kirby really upped the drama, and that panel on the left looks wonderfully dynamic compared to some of his other work. I love the action that seeps out of these pages. These are classic comics, but I feel like there are brilliant moments like this that help you understand why these characters are legendary. I can’t even imagine the excitement of being a kid in that era and seeing the epic badassness that Thor conjures within these pages. 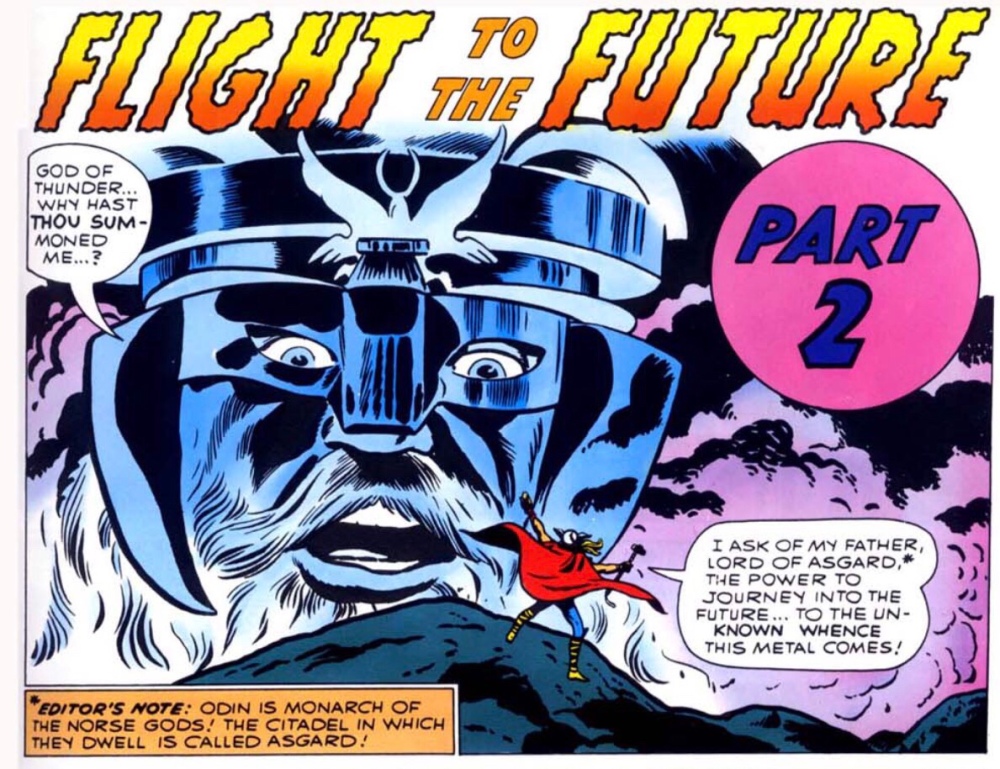 Thor’s father, Odin, appears in the storm to help guide Thor to find the Tomorrow Man. Again, when I turned the page and saw this it felt like it was jumping right out at me. Super cool. This, to my knowledge, is Odin’s first appearance so far. Thor takes the metal flake, ties it onto his hammer, and asks his father to send him to where the metal comes from. This sends Thor into the future by means of traveling tornado.

It’s pretty cool to see him flying by years that have passed in real life. 2013 was just a few years ago! As cheesy as it sounds, it makes me feel like he really did time travel. It was a nice touch rather than just having him appear.

It takes little time for Thor to find the Tomorrow Man when he reaches the future. People point Thor in the right direction to save them, and you realize the Tomorrow Man has already been back home for some time, though he’s on the lookout for Thor. Out of nowhere there’s a figure in a brown robe that starts helping Thor out in various ways, and I started trying to figure out who it was.

Hint: YOU WILL NEVER FIGURE OUT WHO IT IS IN THE BROWN ROBE.

We find out that the guy we think is Thor, is just some random guy Thor recruited to dress up like him and be a decoy. That way when he gets captured, the Tomorrow Man won’t realize he’s captured the wrong person!

Super cheesy, but I was in total suspense for three minutes there.

We get a new Thor power at one point: Hurricane Force exhale. It’s just him blowing a lot of strong air out.

My favorite part is during an encounter Thor has with the Tomorrow Man’s robot defenders. As Thor battles them, suspense hits when Thor loses his hammer to one of the robots. If you’ve been reading since the beginning, Thor turns into a skinny, handicapped man if he loses his hammer for 60 seconds. What follows is a stunning nail biter to get his hammer back before transforming, thus rendering him powerless. The way it’s drawn features a countdown running across the panels, which builds the tension. 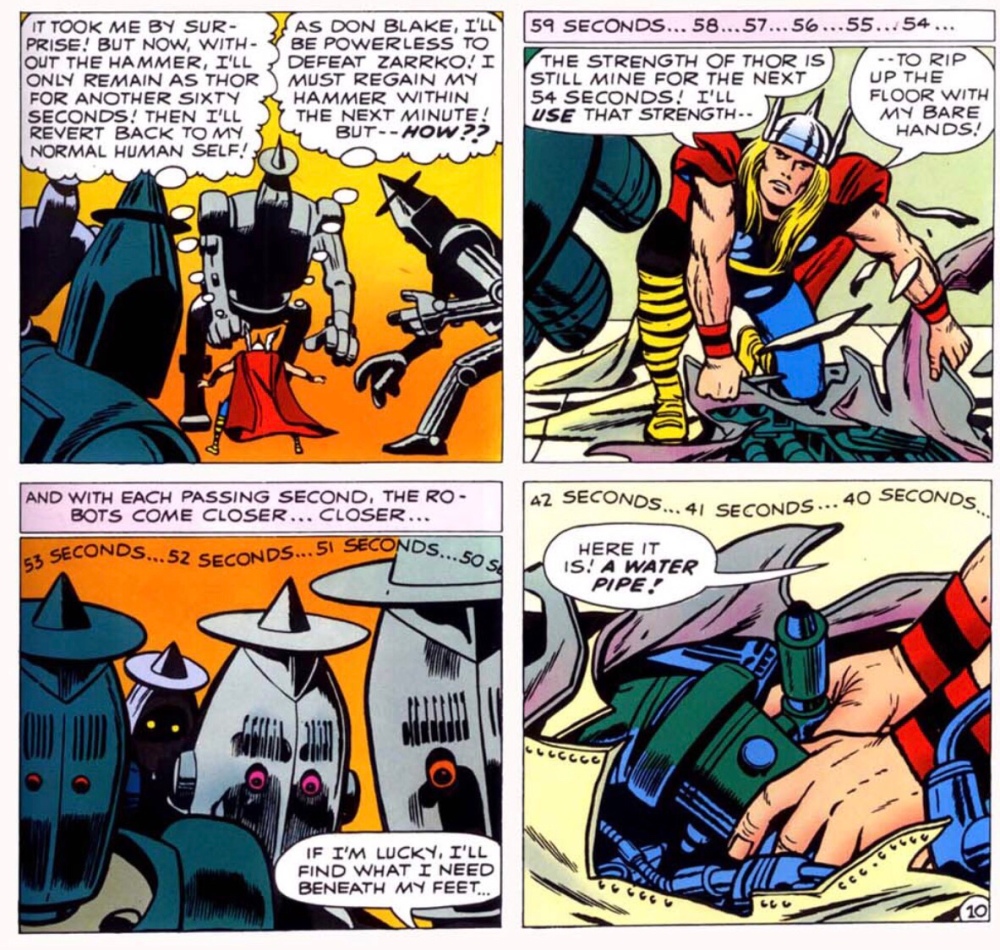 DOES HE GET IT BACK WITHIN 60 SECONDS?!

Thor steals the bomb back, Zarrko crashes while piloting a spaceship and loses his memory (thank you Comics Code!), and Thor whirlwinds back to where he came from!

The military is happy to have the bomb back – they’re ready to get back to their tests! Thor transforms back into his normal Donald Blake self, and we see his assistant Jane daydreaming about Thor, not knowing it’s the same guy. 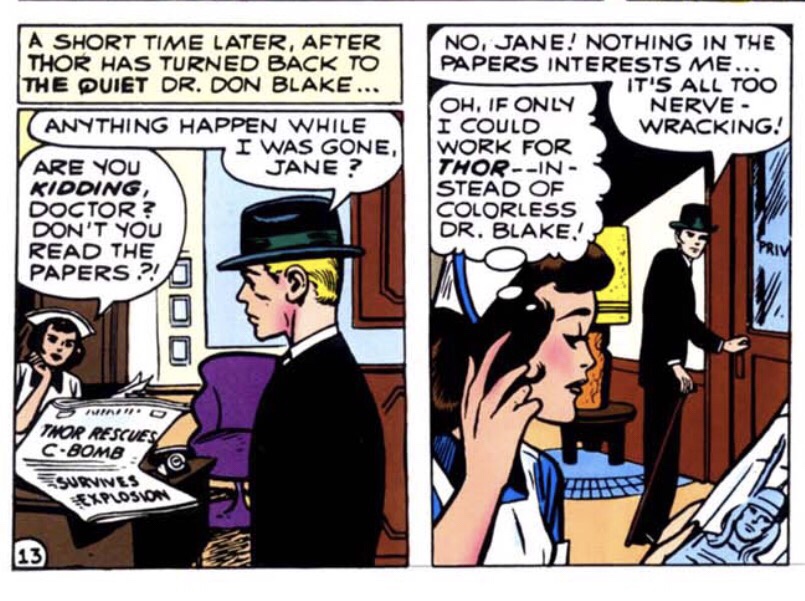 All in all it’s super cheesy, but so much fun. I can’t recommend this stuff to everyone. I think it really relies on being able to take in the context of the times. This was super exciting to a certain audience back then. If you compare this to Thor: Ragnarok, it’s apples and oranges.

View all posts by Michael Buchanan